If you are following 31 Ways To Celebrate The Holidays By Helping Animals, you know that today is all about providing fospice – hospice care for a senior or terminally ill shelter dog or cat.

While sharing a long, happy life with an animal is a wonderful thing (the best), spending a few months, days, or even hours with a dog or cat who has never known kindness or love is just as amazing. It’s all about living in the moment and rewriting their story with a happy ending – helping homeless animals leave the world knowing they are safe, cherished, and finally home. You get back way more than you give and some pretty good karma, too. 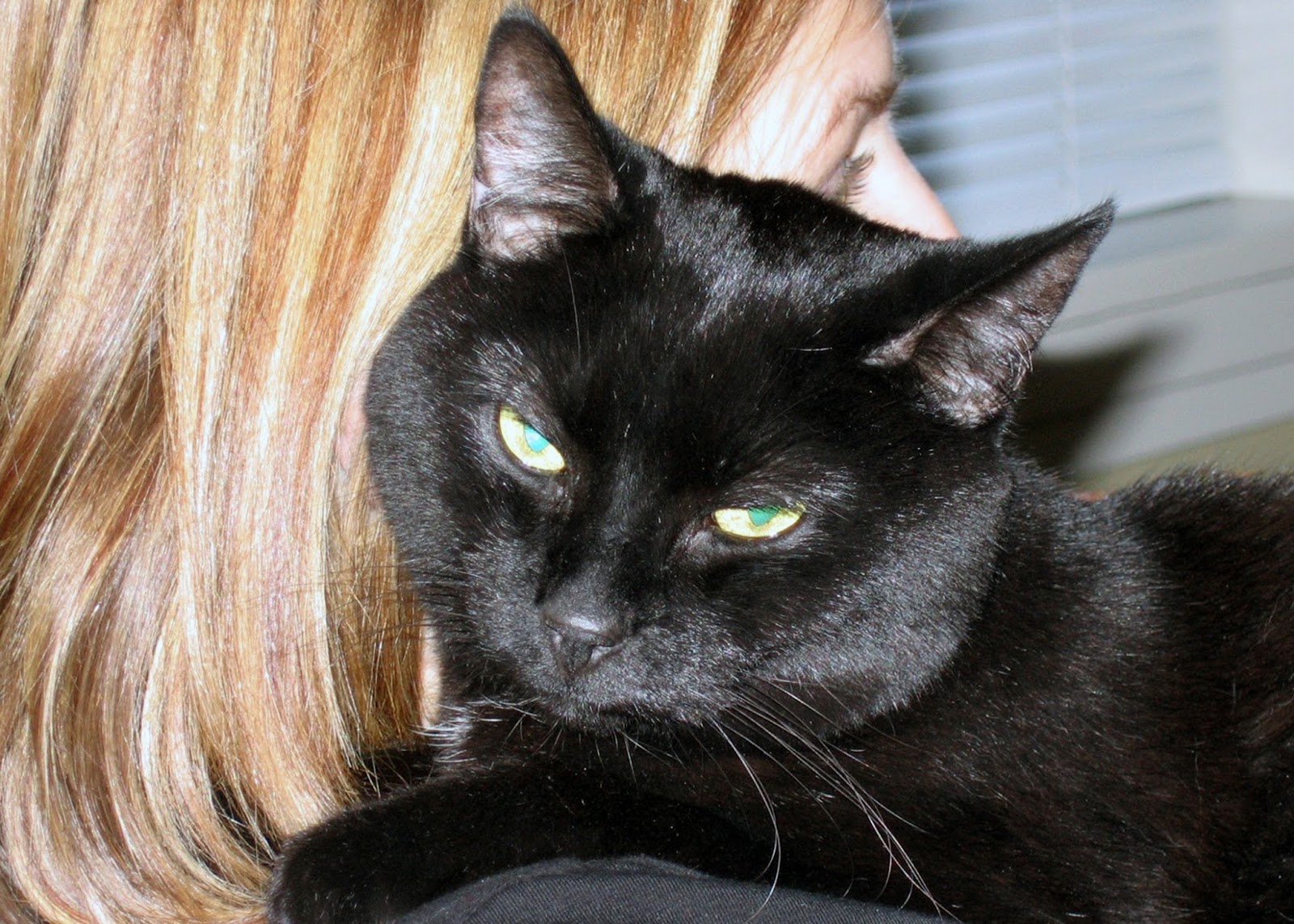 Some cats, like some humans, travel a bumpy road in life. Through no fault of their own, they are bounced from one home to the next, surrendered to shelters or left to fend for themselves on the street. Cleo was one of those cats.

In January 2000, a man called the shelter and told me that he was allergic to his wife’s cat and needed to place her immediately (like that day). The shelter had just opened and we were still setting up the cat rooms so I told him we could take her the following week. The next morning his wife called and pleaded with us to take her cat. Her husband didn’t have allergies and was keeping her cat locked in the basement. Ten minutes later the husband called and said, “Give me one reason I shouldn’t shoot this cat.”

Was he serious, I didn’t know. But listening to his wife crying in the background, I assumed so and told him to bring the cat right over, no questions asked.

Cleo was a ten-year-old, petite black, declawed cat with piercing eyes and a furrowed brow. When she arrived at the shelter, she also had a furless nose from pressing against the basement door, trying to escape. She didn’t care for other cats and was a bit choosy with humans, too. Adopters skipped right over her – no one was looking for an older, crabby black cat. Cleo had been hurt and it showed, swatting and hissing at even the kindest of volunteers. She had a sharp-tongued, angry meow that, combined with her mean right hook scared people and cats away.

Looking back, I think Cleo pegged me pretty early on as her only ticket out of the shelter. Regardless of the weather, sub-zero January or sweltering July, she waited for me in the front window. While the other cats interacted with neighborhood children who knocked on the glass and waved, Cleo did not – and she soon became known as “the mean one.” But when she saw me, she would leap out of the window and run to the door, her eyes going from angry slits to wide-eyed wonder.

The stress of shelter life took its toll and Cleo grew more irritable and unpredictable. After three years at the shelter, she was diagnosed with kidney failure. She stopped eating, lost a bunch of weight, and pretty much gave up. Because I was the only one Cleo would tolerate, the shelter vet asked if I would bring her home for hospice care. I already had a dog and four cats  and taking another one seemed a stretch even for me. But I agreed and at the end of the day, I packed Cleo up and off we went. Sometimes life’s timing isn’t perfect, but you make it work anyway

Cleo wasn’t crazy about our other cats, but she eventually joined them for naps on the radiator, movie night on the couch, and kitty pile-ups on the bed at night. Her crabby cries changed to sweet chirps and each morning she led the happy prance to the kitchen for breakfast. We discovered that behind the swats (and the mean right hook) was a sweet lap cat, afraid of rejection. She lived with us for two more years – celebrating holidays, the birth of my daughter, new jobs, moves, and lots of ordinary days that, when bound together, make years that matter.

When I was pregnant, Cleo would sleep on my stomach and chirp when my daughter kicked. We weren’t sure she would meet her human sister, but Cleo lived until August 2006 when my daughter was six months old. Was it hard taking care of a newborn and a cat in hospice. Yes, it was. But life is not supposed to be perfect or easy and often the most sacred things are also brutally hard, but in a lovely way.

Obviously not all hospice pets have such remarkable second acts. We have provided hospice care for several cats and while none of the others lived as long as Cleo, their final days were in a home surrounded by comfort and love – and for a cat who has been abandoned, betrayed or abused, that’s all that matters.

Celebrate the Holidays By Making An Ending Happy

This holiday season why not give the ultimate gift? Visit your local shelter and inquire about fostering a senior or providing fospice care for a shelter dog or cat. While your time together may be brief, you might just find your once-in-a-lifetime, rewrite-the-story-and-make-the-ending-happy, heart-cat (or dog). Kindness matters.

Please forgive the low quality photos. My photography skills have clearly improved in the last 10 years.