Pip was tiny but at home on his couch he was mighty. Maybe because neither of us had a couch in our early years, or maybe because couches are awesome, but like me, Pip loved the couch.

During Pip’s twelve years with us, we had three couches (our cat Elsie also liked couches but not in a nice way). All three were no-frills, beige; sometimes spruced up with turquoise throw pillows. It was on our third couch that we watched Pip’s final sunrise as the light spread through the branches of the Japanese maple, across the wine-colored crinkly leaves to the homes and street beyond.

Pip died on October 19, 2013. Four years and fourteen days ago. And most mornings since, I have watched the light rise from the same spot without him. Sometimes I feel his presence, but mostly his absence.

Pip was abandoned with another dog in a carrier on Chicago’s north side on September 10, 2001. My husband was out of town so I was up for fostering. When I went to sleep that night, he was still hiding in the carrier. The next morning I found him on the couch with his head wedged between two cushions, unaware that his Yorkie rear end was sticking out. His black and brown fur blended nicely with the beige upholstery and he might have been mistaken for a throw pillow except for the shaking.

I turned on the television just as the second plane hit the south tower. Somewhere in the fifty-six minutes between the crash and collapse of the south tower, I knew Pip would stay with me forever. There was a before and an after September 11th – and Pip was my after. There was no going back for either of us.

I don’t know much about Pip’s early years, but based on his fears I assume he didn’t have a couch or anything else that made him feel big. We had this in common.

My parents lived in different parts of the country. Both moved frequently and I moved with them, and also between them. Not having a couch shouldn’t have mattered. Only it did. It’s hard to feel at home when there’s no place to sit down.

When I was in first grade my mom brought home a green vinyl “couch” that was really more like a bus seat or something you would find in a carwash waiting room. Metal armrests made stretching out or getting comfortable almost impossible. No one ever sat on that pretend couch, not even our cat.

My father’s “couch” was even more absurd: some two-by-fours built up with bricks and mismatched seat cushions. There was no back so you had to sit up straight and not move much (like at ALL) or the whole thing would collapse beneath you.

All this is to say, I am kind of couch-obsessed. And so was Pip. Both of us were (and I still am) kind of complicated but in a nice way, afraid of small things, but brave when it mattered most. Normal-dog triggers, like fireworks and lightning, never bothered Pip, but a walk around the block could send him into a full-blown panic (like me with public speaking).

Pip loved chasing waves, barking at deer, knocking over garbage cans (no matter their size), sleeping on the radiator with the cats, and dressing up in costumes, funny t-shirts and his signature red bowtie. He was gentle and loyal, but a scrapper at heart, once stealing an entire pizza off the coffee table. He loved fostering kittens and adjusted to life with a baby easily, staying awake with me on many sleepless, colicky nights. In my lap or on the couch, he was brave. But outside, on his own, not so much.

I miss so many things about Pip, but mostly not having to explain myself. We were bookends (only being a Yorkie he was cuter than me), a matched set that fit together but nowhere else.

Pip spent his final night on the couch (just like his first night twelve years earlier). The house was dark except for a single table lamp, giving the room a faint but warm glow. His paws stretched out wide with his black and tan fur, silky near the skin, but rough at the ends with brown eyes peaking out from under all that Yorkie fluff – the couch was his until the end.

I stared out the window into the darkness while he slept, hoping he might rally, but by dawn knowing he would not. His breathing was raspy yet peaceful. Normally a restless sleeper (also like me), he slept soundly, his body lighter, deflated and more distant. The next morning he died peacefully in my arms, a place he knew he was safe.

After we left the vet’s office, my family and I went for a walk in the woods, our first without Pip. We didn’t say much of anything. All three of our faces pale, bloated, eyes streaked with red and my seven-year-old daughter still weeping.

I suppose I was looking for a sign and that’s why I found one. About ten minutes into our walk, we found a clearing where streams of sunlight stretched down through the trees and a powerful gust of wind on an otherwise windless day almost knocked us over. It was the kind of wind you could almost catch, filled with texture, dryness and dust – sending hundreds of Pip-colored autumn leaves rushing towards us.

Pip was the wind, finally big, powerful and part of everything. Always.

Four years later, I have a home office with a desk and bright window, but I still prefer working on the couch at strange hours, always feeling a twinge of sadness at first light. I have never been very good at endings. Everything remains unfinished. Missing Pip is part of me now. It just is.

Feel free to share your own reflections on grief in the comments.

Video from Pip’s final trip to Wisconsin and Lake Superior in 2012. 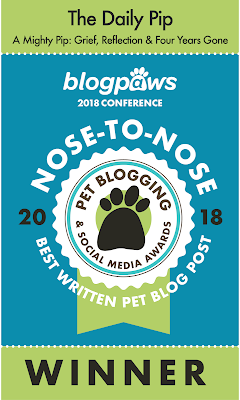