Today is Remember Me Thursday, a global event and awareness campaign designed to bring attention to homeless pets in shelters around the world as well as honor the millions who lose their lives before finding homes of their own. 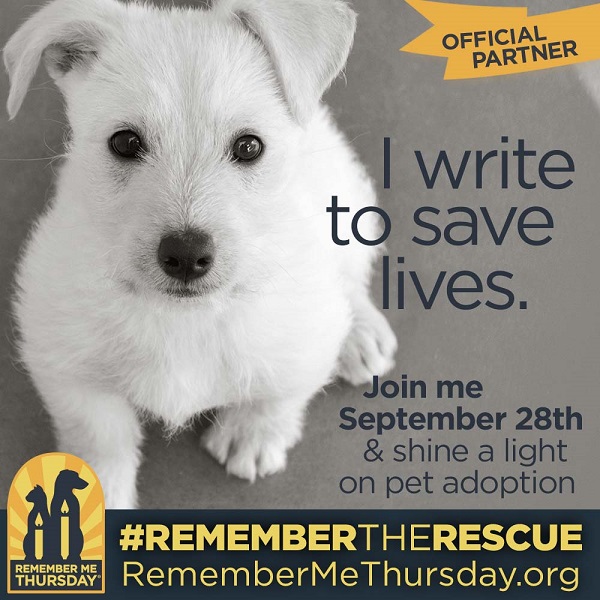 First he was Buddy, then Jack, and finally Frankie.

His first adoption lasted only 24 hours. Buddy was a six-month-old, brown and white puppy with ears and paws too big for his scrawny body. He was listed as a shepherd-mix like most of the other dogs in the shelter, regardless if they actually were or not.

Buddy was an impulse adoption – a cuteness misstep. A father brought him home for his kids without consulting his family. He was adorable, but not housebroken. His wife said she already had two messy kids and didn’t want another one.

Buddy’s mother was a farm dog that should have been spayed, but never was. Every summer the farmer drove over twenty miles to the shelter with anywhere from two to six puppies. He was the only male in a litter of three from an extended family of over thirty, only half of which made it out of the shelter alive.

Kate adopted Jack, formerly Buddy, the summer after college. She was in that crazy, mixed-up transition phase and had not a clue what she wanted to do. Her mother suggested she adopt a dog to give her life purpose. She chose Jack because of his enormous paws. At just over six-months, his paws had grown faster than the rest of him and he couldn’t really walk without tripping over himself.

Jack spent days and nights with Kate in her room – her childhood room with its faded pink and purple from middle school and her white desk that felt too small in the same way Jack’s paws were too big. Sitting at the cramped desk with Jack at her feet, she spent hours staring out the window trying to figure out what came next.

Jack eventually grew into his paws and Kate into herself. They had five great years together, but when she finally moved into her own apartment Jack ended up back at the shelter.

At almost six, Jack, formerly Buddy, was living on borrowed time. The shelter needed space for younger, more adoptable dogs, possibly even some of his younger siblings from his farm dog mom.

Two sisters visited Jack at the shelter. The older one stood above him, the condensation from her soda dripping on his head, while the younger one gave him hugs. She was kind of a mess with tangled hair and pizza sauce on her face. Jack gave her a big wet kiss – he only wanted the sauce, but the little girl fell over laughing and before he knew it, he was walking out the door with them.

Home #3 wasn’t perfect, but it was a home all the same. There was lots of fighting and sadness and sometimes not very much to eat for the sisters or for Jack, now Frankie. Their single mother worked long hours and sometimes forgot to take him out, but he didn’t mind. The sisters had saved him and he was determined to save them back.

Just as he was feeling at home, the mother was offered a job and a fresh start in a new state. Frankie knew all about starting over and also about being left behind. The day before they moved, the younger sister walked him over to her best friend’s house. She didn’t notice his matted fur or his smell, but the new family did. Through her tears, she assured them that he was a good dog – and he was.

The new house was quieter, just two parents and one girl, sad sometimes, but not always. Frankie was fed, walked, and bathed on a regular basis, all good things. But he still spent the first few weeks standing on his hind legs, enormous paws (they were still big) on the windowsill, looking out just in case the sisters came back for him.

Frankie hated thunder and lightning, secretly enjoyed wearing berets, and loved chips so much he could hear a bag open from anywhere in the house. He celebrated holidays and family milestones; went on vacations and road trips, learned to play fetch, and walked around the yard freely, greeting anyone who passed by. For kicks, he liked to bust open the girl’s bedroom door when she had friends over and sometimes did the same thing when she overslept.

When she went away to college, he slept on her down jacket, knowing she would eventually come home. As she grew up, he grew old.

Frankie slowed down and his fur greyed like laugh lines on a human face. When he could no longer manage stairs, enjoy his food, and all the things he loved, he and his family let go.

The fourth time was definitely the charm for Buddy, then Jack, and finally Frankie.

But what if the shelter had been too crowded when the farmer brought in Buddy and his siblings or when Kate returned him five years later? What if the sisters never visited the shelter and his time and luck ran out? What then?

According to the ASPCA, approximately 7.6 million companion animals enter shelters nationwide each year. Of those, approximately 2.7 million are euthanized (HSUS estimates it higher at 3.4 million). An animal is euthanized every 13 seconds in the United States (HSUS). These numbers only include cats and dogs and would be much higher if other companion animals, like rabbits (the third most popular pet in America), were also counted. In spite of such grim statistics, only 29% of Americans looking for a pet choose to adopt from a shelter or rescue.

Please take a moment to reflect on the millions of animals who lose their lives in shelters every year – animals who never get a second, third, or fourth chance. In the five minutes it took to read this post, approximately 23 more animals were euthanized. 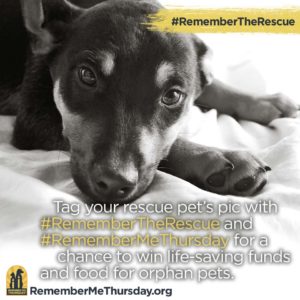