Forgiveness is not something that comes naturally to most people, including me. Part of the basic human struggle, forgiveness is referenced in almost all religions and has been pondered by philosophers, therapists, and artists throughout history – and yet many of us still struggle to forgive. But dogs are different. They don’t hold grudges or let hurt define them. They instinctively live in, and for, the moment – and they have much to teach us about forgiveness. 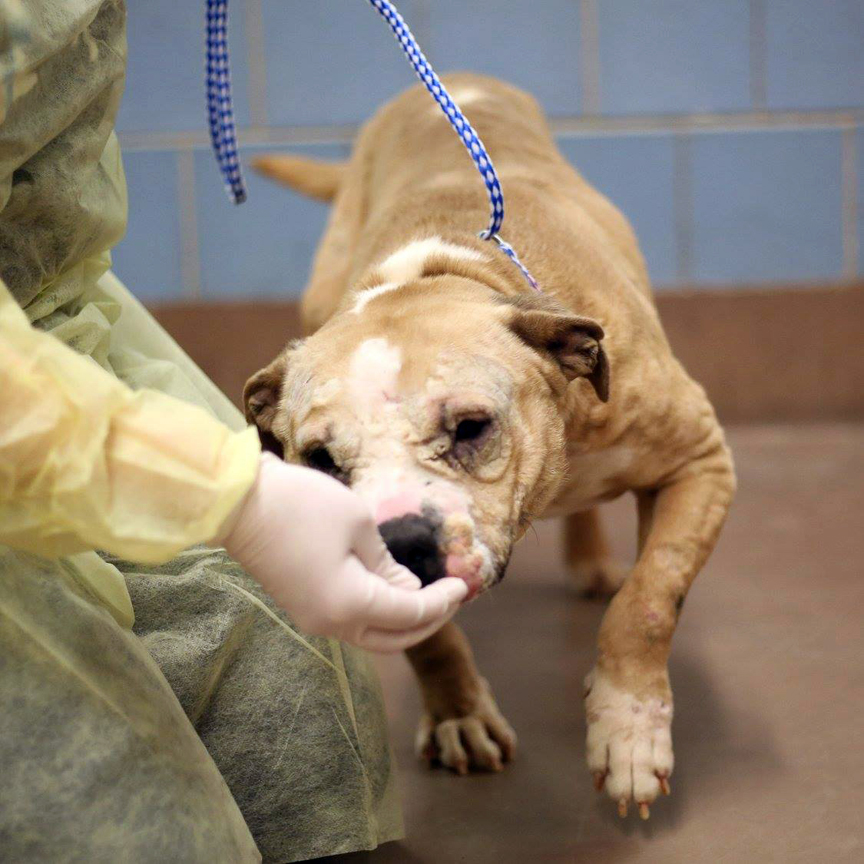 Rescuing Dogs From A Fighting Ring

Edwin was one of thirteen dogs rescued by the Chicago Police Department from a known dog fighter’s residence in November 2015. Edwin was in the worst condition of all the dogs: he was emaciated, his teeth were filed down, his left eye caved in, and his ears ripped. He was covered in bite marks, old scars as well as deep gaping wounds on his face, neck and front legs. His rear legs and lower back were also extremely weak with little muscle control.

Eyewitness accounts describe the scene as a dungeon from a horror movie – cold and dark with dogs chained to the walls and in small crates, living in their own waste without food or clean water. These dogs were trapped in unimaginable terror and misery for who knows how long.

All thirteen dogs were brought to Chicago’s Animal Care and Control; seven were saved and five were humanely euthanized due to severe aggression towards humans and other dogs. The seven surviving dogs joined Safe Humane Chicago’s Court Case Dog Program.

Edwin’s current foster mom, Claire, remembers seeing his picture for the first time on Safe Humane Chicago‘s Facebook page. In spite of his obvious discomfort and the hell he had endured, Edwin looked out at the world with hope and light in his eyes. It was love at first sight and from that moment on she followed his progress closely, checking daily for updates. Because she was fostering another dog, Claire couldn’t take Edwin immediately, but she felt in her heart that their paths would eventually cross.

Edwin remained at Chicago Animal Care and Control for about a month and then was rescued on Christmas Eve by Guardians of the Green Mile, an Indiana based rescue. Much of his first few months were spent visiting a variety of veterinary specialists and he soon began treatment for a severe bacterial infection. Sadly, he also tested positive for heartworm and Ehrlichia (a tick born disease similar to Lyme).

During the healing process, Edwin’s skin lesions were so terribly itchy that he had to wear t-shirts and take anti-anxiety medication to relax. Finding a food his body would tolerate was also a struggle, as he was so malnourished that his organs weren’t fully functioning. His condition was extremely fragile and they decided to delay treatment for his heartworm and Ehrlichia until he was stabilized and strong enough to endure the treatment. 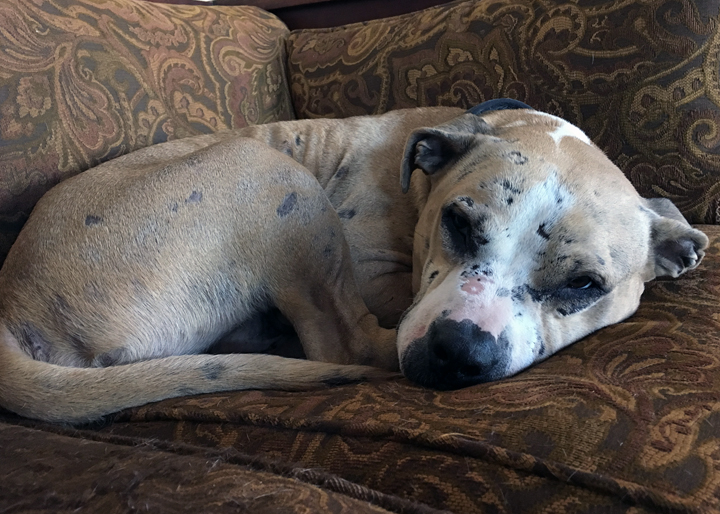 At the end of March 2016, his first foster family had to return him due to a family emergency. Still following his story, Claire jumped at the opportunity to welcome him into her home.

A year after being rescued, Edwin’s body is still healing though he has many scars and bare spots where his fur may never grow back. He recently started his treatment for Ehrlychia and continues to see a physical therapist weekly to strengthen his legs and lower back. Claire says that his strength and coordination are improving, but it is still difficult for him to sit and climb stairs. As a Safe Humane Chicago Court Case Dog, Edwin will also receive a lifetime of behavioral support.

Edwin currently lives peacefully with three other dogs and Claire hopes to adopt him once his treatment is complete. She describes Edwin as loyal and loving, and wants nothing more than to be a good boy and please her. “His heart is open. He is not judgmental or apprehensive about anyone. He has forgiven his past 150% and loves everyone he meets,” she says.

I met Edwin at a Safe Humane Chicago event in September and have been thinking about him ever since. His sweetness, resiliency, and enthusiasm for life are contagious. He harbors no resentment or baggage from his cruel and painful past – his body bares the scars, but his heart and spirit remain untouched and gentle. Edwin has forgiven the world for the violence and suffering he endured and perhaps, we should follow his lead. Make a fresh start, leaving our personal and collective baggage behind and move into the holidays and new year with forgiveness and compassion. It may feel impossible, but if Edwin can do it, so can we.

If you would like to help with Edwin’s ongoing medical bills, please visit Guardians of the Green Mile and make a contribution in his name. You can learn more about and support Safe Humane Chicago’s Court Case Dogs here. 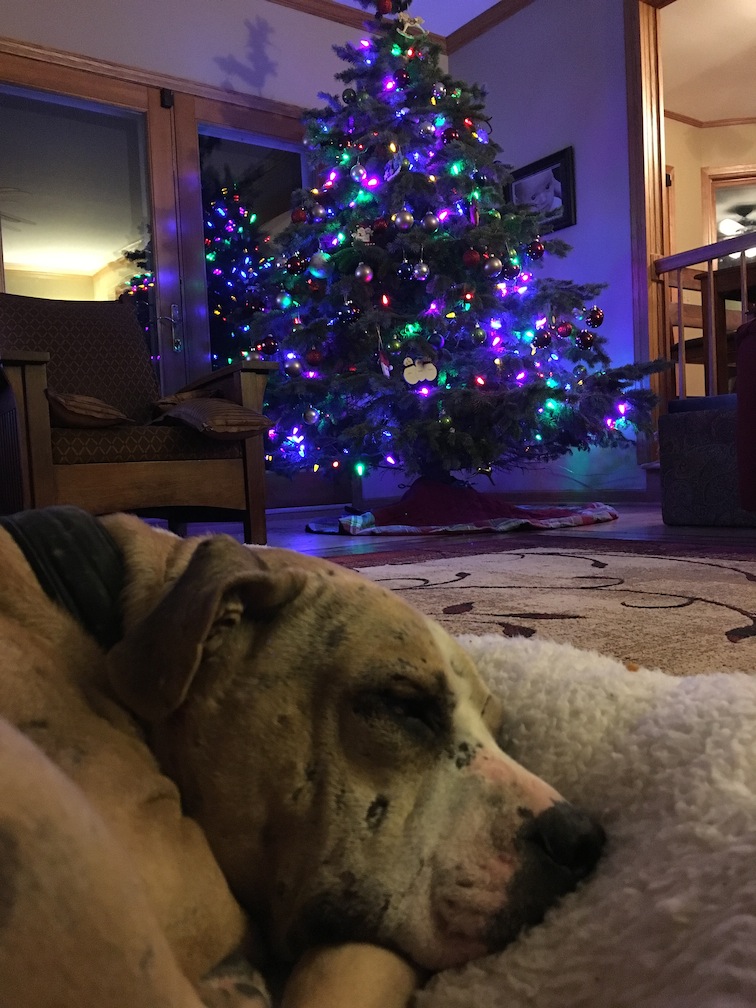 Edwin was adopted in February 2017. He lived on a horse farm with three other dogs and a family who absolutely adored him. Sadly, he passed away on November 22, 2017, a month short of his two year rescue anniversary. Edwin was all about living in the moment and his heart was filled with love in spite of his painful past. His forgiveness and triumph over cruelty, indifference, and hate has inspired thousands around the world and his legacy of unconditional love will live on. Rest in peace, sweet Edwin.

Edwin is part of The Specials, an award-winning blog series focusing on special needs pet adoption. Senior pets, those with chronic medical issues, behavioral or temperament concerns as well as overlooked or misunderstood breeds like Pits and black cats. If not for the courage and compassion of their adopters, many of these animals might have been euthanized in shelters or died alone and hungry on the streets. You can read more special needs adoption posts here.