Wobbles first caught Katherine’s attention because she was making a funny, honking sound. At four months old, Wobbles found herself abandoned and alone at Chicago’s Animal Care and Control (CACC). Her cage card labeled her as a suspected Cerebellar Hypoplasia cat. Katherine knew a CH kitty would not survive long at CACC so she brought her home to foster, but within three days she knew Wobbles would stay with her forever.

What is Cerebellar Hypoplasia?

Cerebellar Hypoplasia is a disorder in which the cerebellum doesn’t develop completely before birth. The cerebellum region of the brain controls balance and coordination and thus, cats with CH have mild to severe motor control issues as well as tremors. CH kitties are generally wobbly and unsteady and sometimes topple over when walking – hence the nickname “Wobbly Cat Syndrome”. CH kitties do not experience any pain or long term health concerns as a result of their condition. Like other cats, they can live long, happy lives and develop strong bonds with their human and furry families. You can learn more about Cerebellar Hypoplasia here.

Wobbles has mild CH. She pulls herself up on the bed and couch using her nails. Sometimes when she tries to jump, she just bounces in place. She occasionally runs into things and falls over, but quickly picks herself up and goes about her business. Wobbles loves people and other cats and is pretty much the resident therapy cat for anyone in need. Most importantly, she never lets anything hold her back and doesn’t realize or care that she is different.

Wobbles shares her home with another wobbly cat named Fawkes. Fawkes is not a CH kitty. Tragically, his issues are the result of human cruelty. When he was a year old, he was turned into DuPage County Animal Control after being found buried under cinder blocks. He suffered a broken femur and his hip joints were shattered. Like Wobbles, Fawkes is a little unsteady on his feet and his tail and hips remain slightly crooked and off-kilter.

In addition to his coordination issues, Fawkes has a history of pancreatitis. He also started off as a foster cat, but after seeing him through several bouts of pancreatitis, Katherine made things permanent and adopted him. Although Fawkes has suffered unimaginable pain, he remains gentle and loving. Because pancreatitis can appear without warning, Katherine says she has learned to be sensitive and tuned in to his needs on a much deeper level and as a result, their bond is incredibly strong.

Katherine says both Wobbles and Fawkes have taught her to live in the moment. Neither cat lets their issues hold them back and both seem comfortable with their strengths and limitations. Their confidence, courage, independence, and, in Fawkes’ case, forgiveness, is truly inspiring. Katherine wishes others would open their hearts and homes to special needs cats like Wobbles and Fawkes. 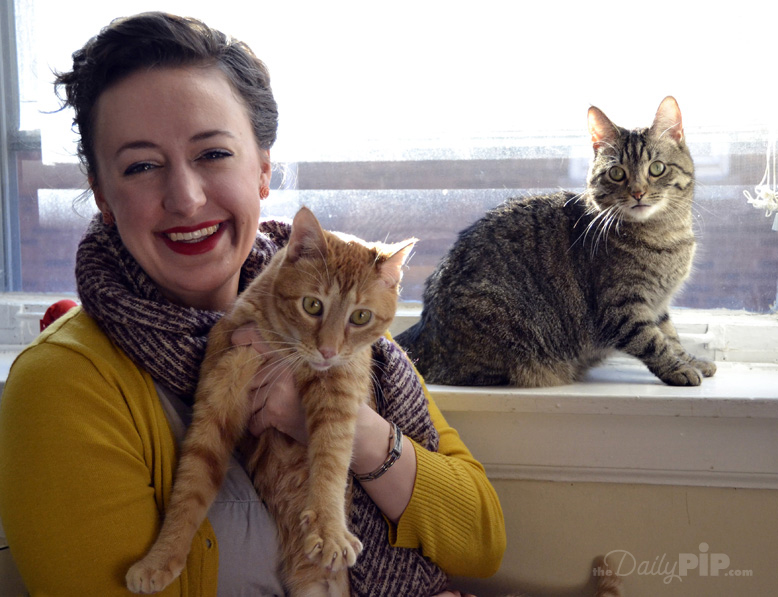 You can learn more about Fawkes and Wobbles by following them on Instagram. Please also check out Grassroots Animal Rescue, the wonderful organization for which Katherine fosters. For more information on Cerebellar Hypoplasia, please visit our friends at The Kitty Cat Chronicles.

Please consider fostering or adopting a special needs animal because different is beautiful and second chances are amazing. If you enjoyed this post, please check out my posts on adopting a deaf dog and adopting a survivor of abuse.

Wobbles and Fawkes are part of The Specials, an award-winning blog series focusing on special needs pet adoption. Senior pets, those with chronic medical issues, behavioral or temperament concerns as well as overlooked or misunderstood breeds like Pits and black cats. If not for the courage and compassion of their adopters, many of these animals might have been euthanized in shelters or died alone and hungry on the streets. You can read more special needs adoption posts here.